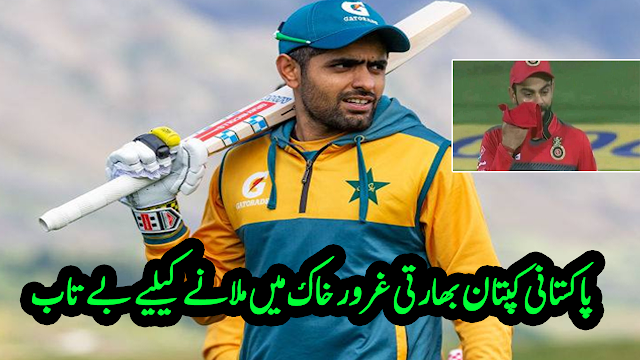 Lahore: The Pakistani captain is eager to join the Indian pride in the World Cup, while the confidence of victories in the UAE began to be reflected in the tone of Babar Azam.

In a virtual press conference, Babar Azam said that representing the country is a source of pride and a captaincy challenge in a mega event. All the players are eager for the best performance and are looking forward to the start of the competition. We have won 10 consecutive victories here, which will also benefit in the match against India.

“Keeping things simple, we have to do well in all three areas. The better performance gives us confidence. I’m in good form myself. It will also benefit the team. It was a proud moment for the nation, we will do our best to repeat history.

To a question, the captain said that unfortunately the international series could not be held before the mega event, some players had to make changes due to poor performance in the domestic tournament, Shoaib Malik, Fakhr Zaman, and Haider Ali have joined the team, Shoaib veteran And the super-fit players are counted, plans have yet to be made to include them in the playing XI, the country has benefited from playing National T20 Cup matches, the players in the squad also remained in groups in the training camp.

Babar Azam said that Mohammad Rizwan is the best wicketkeeper-batsman and is playing very well, he is a shining example for all of us, batting with him is a pleasant experience, we will try to play long innings for both the teams. In the T20 World Cup, New Zealand captain Ken Williamson and national pacer Hassan Ali are favorites in bowling.