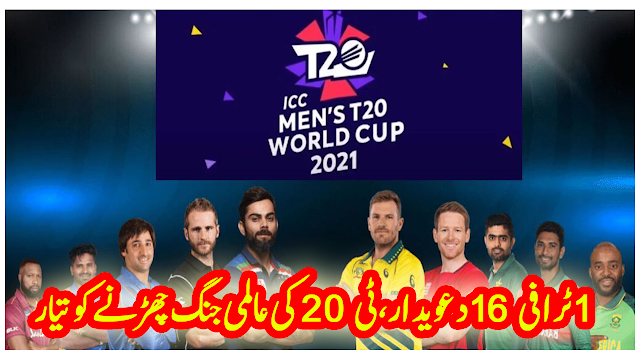 Muscat / Dubai: 16 contenders for a trophy as World T20 prepares for war.

Five years later, the ICCT20 World Cup kicks off in Oman on Sunday. The tournament was scheduled in India but is now being hosted in Oman and the UAE due to the devastation of the coronavirus in the country.

Cricket fans around the world are anxiously awaiting this tournament. On the other hand, the heartbeat of the players is also increasing. The prediction of sixes and fours in the short format has already been issued. The spinners are confident of taking full advantage of the conditions while the fast bowlers have to bowl with all their might to terrorize the opposing sides.

In the first match on the first day, host Oman will face Papua New Guinea. Both teams want to take full advantage of this opportunity. Like the other sides, the eyes of the players of these two teams are shining with the hope of victory. Oman has a home advantage, the team is already very happy to host a world-class cricket tournament in their country.

Papua New Guinea, on the other hand, is determined to use its skills successfully on the pitch. Bangladesh will take on Scotland on Sunday. The Bengal Tigers could not reach the Super 12 round directly due to not making it to the top eight until the cut-off date. You have to get the top position while doing so so that the dream of playing the next round can come true.

Recently, Bangladesh defeated Australia and then New Zealand by a large margin in their home country, due to which the morale of the players is quite high and they are likely to play a full game for the victory.

Scotland will also be eager to showcase its talents. In the past, the Scottish team has played well against big teams on some occasions, which is why they are hopeful of hunting down the Bengal Tigers as well.

The winning teams will narrow the gap to the Super 12 round, while the losing sides will face the challenge of victory in the upcoming match. Group B matches in the preliminary round of the World Cup will be played in Abu Dhabi on Monday, Ireland and the Netherlands will play in the afternoon, Sri Lanka and Namibia will compete in the evening.

The match-winning team will not be able to do anything

The ICCT2 World Cup kicks off on Sunday, with the International Cricket Council (ICC) already issuing playing conditions. Will

It may be recalled that Australia had hinted that it would not play in the World Cup with the Afghan team due to the possibility of the Taliban not allowing women cricketers to play.

The ICC says that the team that wins in both the group stages will get 2 points. If the match is tied, the result does not come out or the match is ended, then both the teams will get one point each.

The ICC has also announced a reserve day for both the semi-finals and the final of the mega event, but they will be in general group matches. Every effort will be made to complete both the semi-finals and the final on the scheduled day, even if it requires some necessary cuts in the overs. But if the match is not completed on the scheduled day, the match will be completed on reserve day.

The semi-finals of the tournament will be played on October 10 and 11 in Abu Dhabi and Dubai respectively. The final will be on November 14.